A-Z of Fictional Characters: G is for Garion.

Posted on November 14, 2016 by Angela Wooldridge 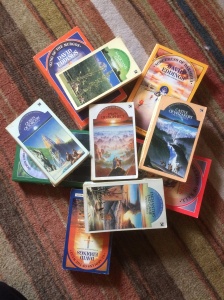 Garion is the main character in The Belgariad series by David Eddings.
This consisted of five books; Pawn of Prophecy, Queen of Sorcery, Magicians Gambit, Castle of Wizardry and Enchanter’s End Game.

I’ve always considered that I grew up with Garion. I first read Pawn of Prophecy when I was umm… 12-ish? Similar to his age in the first book. I quickly read the next two, Queen of Sorcery and Magician’s Gambit but then had to wait for the next books to be published and they came out probably a year at a time, which meant that I grew up in step with him. So I was probably about 15 by the time Enchanter’s End Game came along.
I spent a lot of years meeting his friends and sharing his adventures.

Really it’s your classic quest fantasy. Farm boy gets caught up in a journey to retrieve a mystery object and along the way discovers there’s a lot more to his heritage than he (or anyone else) realised. But Eddings had a lot of fun with his characters, taking time to let them grow and develop.
On one level you could look at them and say they were cardboard cutouts – to start with, there’s the simple farm boy, the plain but honest blacksmith, the smooth talking thief and so on. Then they each came from a different land, which had it’s own stereotypical characteristics.
Left like that, it would play out as your classic quest fantasy, but the times were a-changin’ back when this was written and character was becoming as important as plot and that’s what makes this such a gem. These characters live and breathe; they love and laugh and hate; they make mistakes and they joke. The fact that they arse around so much is probably what makes you love them.

Eddings followed up this series with The Malloreon, which takes up with everyone eleven years later.
Reviews are divided on these. To many it was just a re-hash of the first series. While I can see where they’re coming from, again I was of an age with Garion (ish), so it felt like I was catching up with old friends and making new ones.
Perhaps I’d grown up by the time his later works came along though as I started to see how he was re-working the same old characters in slightly different ways with different names. This is a shame as you don’t like to catch sight of your hero’s clay feet. But perhaps it was more a sign of the publicity machine kicking in and demanding more of the same without stopping to check if that was what people really wanted.
As far as I’m aware he hasn’t written anything fresh for some time, and even if he did I’d want to read quite a few reviews before taking a chance, but these books are ones I will still pick up and read again and again.

Do you have an old favourite character that you grew up with?

1 Response to A-Z of Fictional Characters: G is for Garion.