A to Z of Fictional Characters: M is for Mahlia

Posted on January 22, 2019 by Angela Wooldridge 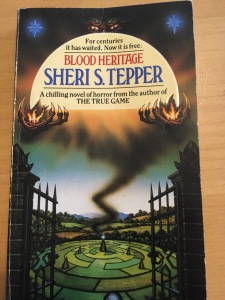 I know – it’s been ages since I wrote one of these posts and I aim to finish the alphabet this year. In fact, I was all set for this post to be about Menolly (heroine of Anne McCaffrey’s Dragonsong). The post has been written and ready to go for ages… But the other day I suddenly remembered Mahlia.

Everyone knows Menolly, I thought. But how many people know about Mahlia, heroine of Sherri S Tepper’s Blood Heritage?

Tepper is well known for her fantasy and sci-fi, but she also wrote three excellent horror novels, two of which feature Mahlia Waiwela.

Of Polynesian and French descent, Mahlia has witchery in her blood. It’s inconvenient more than anything, because she rarely knows if what she sees is ancient history, or yet to come.

When she meets recently widowed, Badger Ettison, she immediately divines that his wife and son weren’t killed in a boating accident as he was led to believe, and becomes caught up in his subsequent search for his missing family, uncovering a world of deceit, magic, and demons trapped for centuries.

Tepper has a haunting, lyrical turn of phrase painting her characters in beautifully sparse colours, and dragging you into their world.

1 Response to A to Z of Fictional Characters: M is for Mahlia