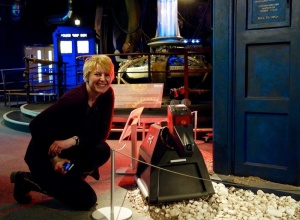 Angela Wooldridge lives in Devon, in a rackety old house with her husband and the railway children.

She always wanted to be a writer, ever since those early days of exploring Narnia with the Pevensies and eating sardine sandwiches with the Famous Five. Back then she used to submit her latest scribbles to her poor English teacher who bore it very well and even helped to encourage and inspire her.

There was a hiatus during the barren teenage years when important things like life and fitting in got in the way. During that period somebody mentioned that no-one really achieves anything until after they’re 30 and have something to write about, which seemed like a good excuse to go and do a few things rather than actually committing pen to paper.
After a fair amount of bumbling around she ended up working in IT (which her teachers would probably never have predicted), then after a while eloped and had kids (ditto).

Then, one day, she took a creative writing course at her local college…
…And it was like a tap being turned on after a long, long time. A bit creaky at first and some nasty brown lumpy stuff came out, but then this marvellous gushing waterfall of ideas that had been dammed up for years came bursting out (in glorious technicolor) and although she’s treading water in the shallow pool at the bottom for now, she’s putting the structure in place to enable that pool to become a tributary to the Amazon river.